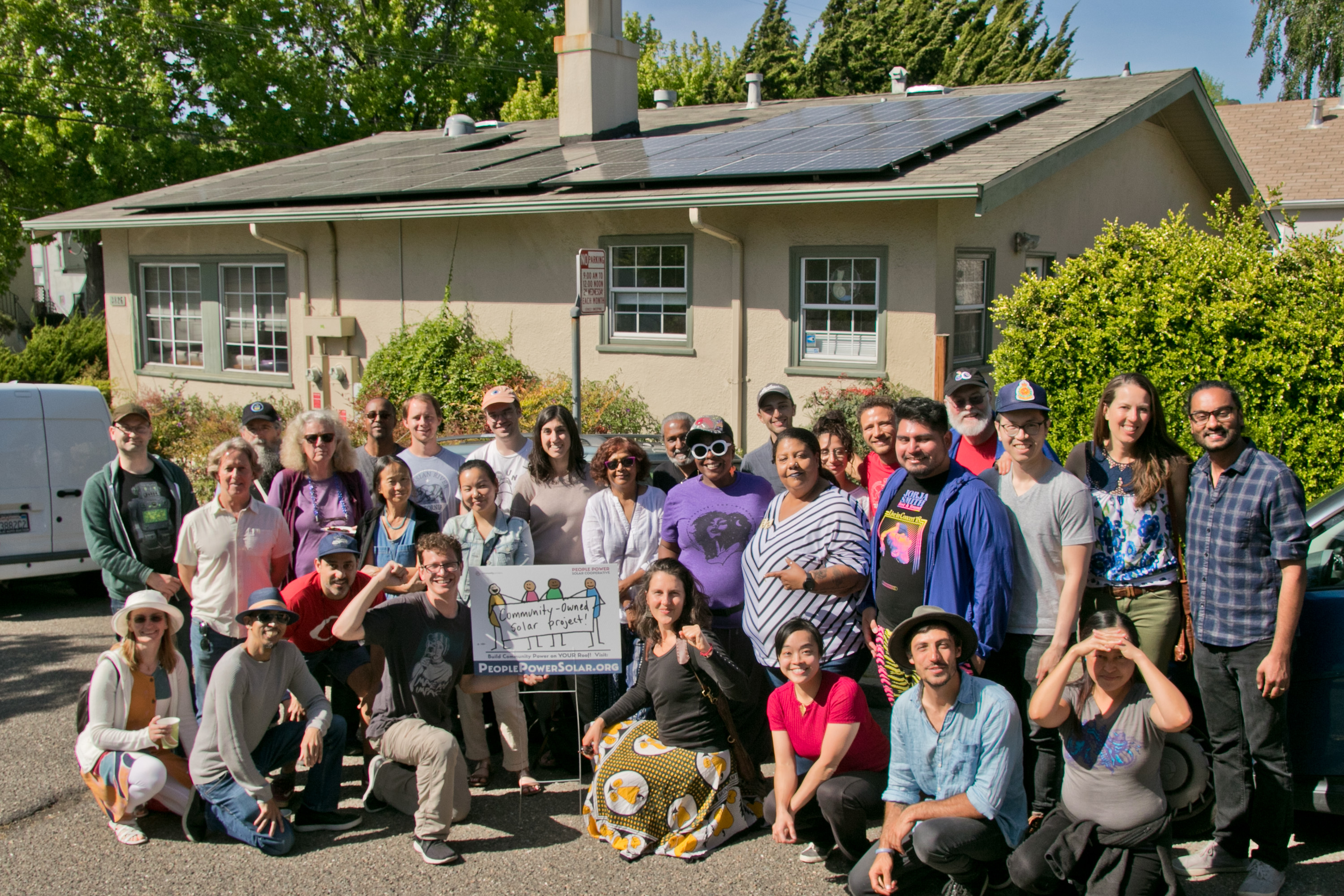 OAKLAND, CA, 03/21/19 - People Power Solar Cooperative announced the construction of its first solar project in Oakland on March 21, piloting a new model for community-owned energy in California. The residential-sized 7 kW project is financed entirely by small investments from more than 50 local community members and leaders -- the cooperative’s Owners -- who have each purchased up to ten $100 shares of People Power. It is the first residential energy project in California to be owned by members of the broader community, and not municipally-owned, as far as the cooperative knows. The model is simple: the cooperative owns the project and will sell power to the homeowner and tenants at a rate lower than PG&E’s. The cooperative will, in turn, pay small dividends to the Owners who helped finance the project. People Power encourages anyone to sign up to learn more and/or get involved at peoplepowersolar.org/get-updates.

This groundbreaking community-owned solar project was built on the roof of a local activist, lora jo foo (foo does not capitalize her name). foo is a retired labor organizer and attorney. She is a native of the San Francisco Chinatown community, where she began working as a garment worker in a sweatshop at the age of 11. She later litigated numerous ground-breaking cases representing low-wage workers in sweatshop industries. She has been active in the No Coal In Oakland movement, helping to stop the building of a coal export terminal on the Oakland waterfront. As foo puts it: “While the work of fighting against the causes of global warming is important, equally important is the fight for renewable energy to replace fossil fuels and who is in control of these vital resources of our lives.”

“This project is more than putting solar on a roof. With more than 50 members of the community behind this project as owners, we are starting to show that solar ownership is about more than clean power. It’s about community power,” said Crystal Huang, co-founder of People Power Solar Cooperative.

People Power Solar Cooperative grew out of a multi-year effort by the Sustainable Economies Law Center, also based in Oakland, to develop a model for community energy that empowers communities to steward their own energy future.

“Currently, more than half of Californians cannot own solar because they either don’t own their home or don’t have the capital or credit. That sidelines a bunch of communities, disproportionately low income communities and communities of color, from the financial and environmental benefits of owning solar”, says People Power co-founder Grayson Flood. People Power aims to act as an administrative umbrella for other groups seeking to create community-owned solar projects in California. It also provides a model for community solar for other states without strong shared-solar laws. See our Project Page for more information about this new model.

People Power’s website lists partners from other Bay Area energy justice groups, such as the Local Clean Energy Alliance, the Asian Pacific Environmental Network, and Communities for a Better Environment. The cooperative hosted its launch party on December 5th, 2018, at Impact Hub in Oakland.

“People Power Solar Cooperative allows anyone to be more active in participating and designing the future of our energy and our society for the planet. It’s a very powerful, non-passive way of changing things in our own community,” said Brandi Mack, a People Power Owner, national director of the Butterfly Movement, and community designer at Designing Justice + Designing Space.

People Power Solar Cooperative has engaging cartoon bylaws in plain-language to make their model welcoming and understandable, even to high school-age youth. More information can be found at our about page.